Cyclists are one of the most vulnerable road user groups in the UK due to the fact they have significantly less protection than those in a car or larger vehicle. We decided to conduct a survey to find out what cyclists think about safety and other road users.

We surveyed more than 1,500 cyclists in the UK on their feelings about sharing the road with other vehicles, their safety, and their knowledge and opinion on current rules of the road. Here is what we discovered.

The survey revealed that 15% of cyclists in the UK have been involved in an accident. Of these, 19% of incidents were blamed on cars or car drivers.

The latest data on reported casualties from the Department for Transport shows that 16,498 cyclists were involved in accidents in 2018. While this figure has been in steady decline since 2015, the number of cyclists killed or seriously injured has risen over the same time period by 16%, from 3,047 in 2015 to 3,541 in 2018.

One-in-10 cyclists afraid to cycle on the road

Of the 1,500 cyclists who participated in the survey, 10% said they do not cycle on the road. This number rises to 16% amongst those aged over 45 years old, while it drops to 6% amongst those under 45.

When asked for their reasons why, most people described cycling on the road as ‘dangerous’, ‘risky’ and ‘not safe’, while others said they were ‘scared’ and ‘nervous’ about cars.

In addition, 44% said that more cycle lanes/paths would encourage them to cycle on the road. This was followed by improvements to road conditions, including more signage, lighting and smoother surfaces (19%) and drivers having more awareness about cyclists (16%).

Respondents were asked a number of questions in relation to safety, including:

All the above safety precautions are referred to in The Highway Code, meaning this is official advice to help keep cyclists safe while on the road.

In our survey, 88% of cyclists said they do wear a helmet, with this number increasing to 90% amongst those who ride on the road.

Vehicle drivers most likely to negatively affect a cyclist’s confidence

Survey respondents were asked to choose which factor most negatively affects their confidence when cycling on the road. The top five responses were:

When asked which road users positively affect their ability to cycle on the road, cyclists voted the top three as:

The top three road user groups most likely to negatively affect a cyclist’s ability on the road were:

Participants were also asked how often other road users negatively affected their ability to cycle on the road. Car drivers were voted the most likely to have a negative impact daily with 31% of the vote, followed by van drivers (28%) and taxi drivers (24%).

Some 59% of respondents voted other cyclists as never having a negative impact, with motorcyclists (49%) and pedestrians (48%) placing second and third.

Cyclists’ knowledge of rules of the road

We asked cyclists questions in relation to rules that are included in The Highway Code and must be followed. When asked if cyclists are allowed to ride on the pavement, 77% answered correctly (Rule 64 of The Highway Code), while 17% said it was allowed and 6% said they did not know.

When asked whether cyclists could ride two abreast, 73% of cyclists answered correctly by saying it was allowed (Rule 66 of The Highway Code), while 20% answered incorrectly and 7% said they did not know.

Do you ride your bicycle on the road?

Why do you not cycle on the road?

What would need to change to encourage you to cycle on the road?

Do you wear a helmet?

Do you wear light-coloured or fluorescent clothing while cycling?

Is your bike fitted with front and back reflectors/lights?

Do you have a camera fitted to your bike/helmet?

Have you ever attended a cycling safety training course?

Have you ever had an accident on the road while on your bike?

Can you provide details on the accident, including who caused it? 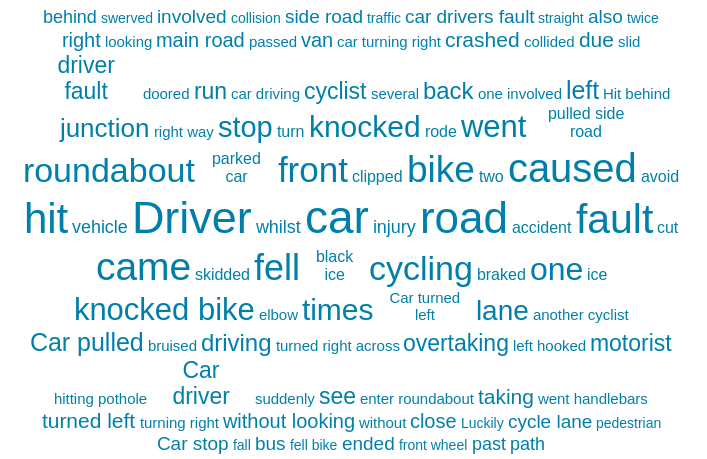 What is the one factor that MOST NEGATIVELY affects your confidence when cycling on the road?

How do the following road users affect your ability to cycle on the road:

How often do the following road users affect your ability to cycle on the road:

Are you allowed to cycle on the pavement?

Can cyclists ride two abreast (side by side)?

Can cyclists carry a passenger?

Do you think cyclists should be tested and given a licence like other road users?

The Death of a Crater - Upper Chorlton Road, Manchester

Written by Joanne Brine
Personal Injury
Cycling’s for life, not just for Coronavirus

View other posts by Nadia Kerr